vCO - what´s up with VcOptionValue?

Based on my article about the fixed VM boot order and the used VcOptionValue I investigate some time to figure out what else we can do with these parameters. The main statement in my opinion is: "It is the .vmx extension as API data object.".

As described in the API reference: OptionValue we know that there are two properties: key and value, as used in many other objects.

The things which aren´t described are the keys and the values :( The thing I know from the powershell scripts was the "bios.bootDeviceClasses" key in my last article: VM Boot order.

After some investigation I found several other keys and values described by Ulli Hankeln at:

With the knowledge of these parameters it is really easy to automate your .vmx parameters. Especially the uuid parameters ("I copied this VM"), could make your life easier.

Here is one example to automate the KB196 change (repeated characters in VM console) which comes up very often in Linux-VMs: 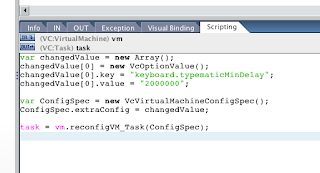 Please find the .package file for download at google-docs:

If you have use-cases, please let me know how you change the rules :)
Posted by Christian Johannsen at 11:34 PM