vCO - from infrastructure to the cloud (Cisco USC Plug-in)

As mentioned in many other blog articles in the past, the development of the vCenter Orchestrator Plug-ins goes straight ahead. A few weeks after the vCloud Plug-in the Cisco UCS Plug-in was released yesterday! This Plug-in shows how many ways there are to design automation and orchestration solutions. In my opinion there are two main strategies to implement a vCO in customer environments:
With this in mind there are two other important things to know: the infrastructure and the cloud automation. In every VMware cloud there is also the need to establish an basic vSphere infrastructure (infrastructire as a service) which abstracts the physical resources. So if you have a physical infrastructure you can know design the complete automation from hardware delivery up to cloud integration (application as a service).

Don´t get me wrong, you can integrate your ESX/ESXi host-systems in an automated way also without the Cisco USC Plug-in but if you have Cisco hardware the deployment is much more comfortable because of using the UCS API. Here are some examples from the release notes:


As you can see the service definition is also available for the cloud infrastructure and allows you to definine service levels and tiers in an automated way.

With this method the Cisco UCS Manager XML API maps the objects with their attributes and functions in the vCenter Orchestrator.

In the Plug-in packages are also several example workflows and actions to automate an existing environment in a fast and comfortable way. 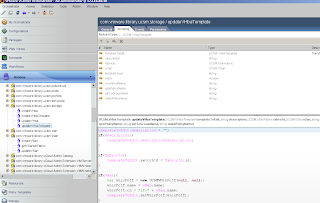 I hope that we now can address a wider audience to automate and orchestrate their cloud infrastructure.