vCO - How to automate Altiris Deployments

This week I was in Vienna to implement a VM deployment automation based on Altiris. First thing I always ask is: "Why do you use Altiris as deployment mechanism if you have VMware templates?" and in this case the physical deployment was the answer. So Altiris Deployment is used for physical and virtual servers.

What I like when implementing these things is that the customer has the freedom to choose where to deploy. So there are no borders to deploy a VM or vApp in the vCloud Director for example. It´s just a decision field away :)

First thing you need is to have the Altiris SDK installed on your Altiris Deployment Server. You can find the actual version here: http://www.symantec.com/business/support/index?page=content&id=TECH40810

After the installation you will have another IIS website available: /Altiris.ASDK.DS/ which serves the webservice "API". Now we have two options: the SOAP plug-in and native HTTP POST/GET commands. I prefer the HTTP command way cause the SOAP API isn´t available as one WSDL definition. 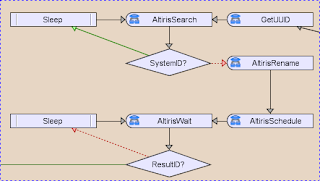 The command for searching a system (HTTP GET) could look like this:


So, now have fun to automate your Altiris Deployment :)
Maybe this also could be used to automate the vApp deployment including Altiris for the vCloud Director...

Posted by Christian Johannsen at 9:32 PM