How to see the primary Nodes in a VMware HA Cluster?

As you know, VMware vSphere has really nice features. One of then is the VMware HA or VMware High Availbility feature. With this, it is possible to build a high availbility Cluster for virtual maschines. Any virtual Machine in that cluster are protected for Hosts crashes.

The HA Feature monitors all ESX-Hosts in the Cluster and restart any virtual maschine on other ESX-Server if one or more ESX-Servers are crashing. So the virtual machines are back and running in a few minutes.

A VMware Cluster can be build with at least max. 32 ESX-Hosts. You must configure it by the vCenter Server, but pretty nice is, that the VMware HA Feature works without the vCenter Management Server. This means that the ESX-Host is montoring itself and all other ESX-Hosts over heartbeats.

In the normal Szenario, if one primary Host goes down, the other primary Node realize that over the heartbeat and promote a secondary Hosts to a primary Host.

But what happend, if all primary Hosts goes down at the same time? Now the Cluster has a problem, that no ESX-Hosts has Information about the whole Cluster and can´t promote any Hosts to a primary state. Did you think that this szenario are infrequent? We have seen this really often.

One Example is, when you build a Cluster over two locations. The only secured way for that szenario is, to build up a Cluster with max. of 8 ESX-Hosts, so you can sure, that at least one Host per location is a primary host.

But what can you do if you want to build a cluster with more than 8 Hosts? Are you sure that you have primary Nodes on all Locations? Where can you seen this? The vCenter Client dosn´t show you this Information. 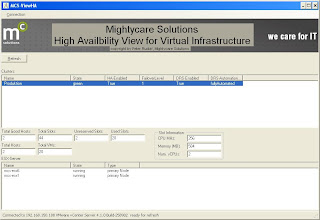 http://www.mightycare.de/downloads/mcs_viewha
Posted by Peter at 10:42 AM