Based on the actual evolutions in the VMware product environment, I decide to installl the new vCloud Director in my home-lab. There are two things which i had to get before starting:

After several register processes and hours of downloads I decide to start with the oracle server based on windows. In the future I think i will run it under RHEL also.

Starting with the Oracle DB server there are several things which need my attention, because after the installation the Enterprise Manager (http://localhost:1521/em) was available to me but the listener only reacts on the 127.0.0.1 address. In my opinion there was no way to change it while installing.

which reports an error while connecting. After that i try to get an status of the actual configuration with:

which shows several TNS-xxxx errors (for example: TNS-03505: Failed to resolve name). After reading some support statements i stopped all services in the server manager.

Then i go to the dbhome_1 directory and edit the tnsnames.ora and listener.ora (configuration files for the service) and change all localhosts to the right DNS name. 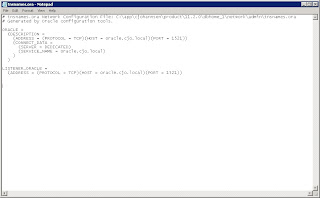 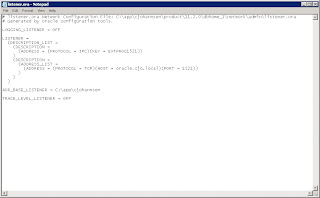 which shows the right connection name. 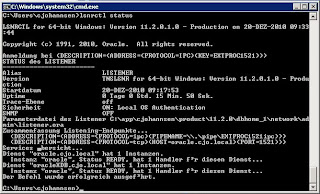 Also i try another

which shows the following:
﻿﻿

﻿﻿
Next part now is to install the vCloud Director and try if the connection works. An update will follow...
Posted by Christian Johannsen at 10:32 AM